- September 14, 2012
As I said in Top Ender's Friday Lunch Post, where I've made her a Hello Kitty Pizza, I was so excited to make these Pizzas I was skipping round the supermarket when collecting the ingredients we needed. Making the Pizzas this morning was rather fun and the children got to see the pizzas before they went to School because I had to cut them in half as they rose more than I thought they would! 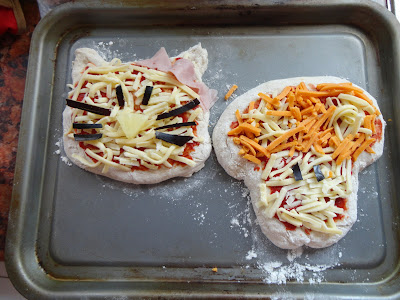 To make the toad shape (who I think looks more like Tigger from Pooh Bear) you shape it so that the top is more bulbous than the bottom in a classic "mushroom" shape after all Toad from Mario is a Toadstool. I then covered the stem in "white" cheese (it's a mozzarella and cheddar mix) and using a cookie cutter made two circles of the white cheese on the cap. I then covered the rest of the cap in red cheese (Red Leicester, which as we all know is actually Orange but close enough you know!) before placing two Aubergine stripes for eyes. 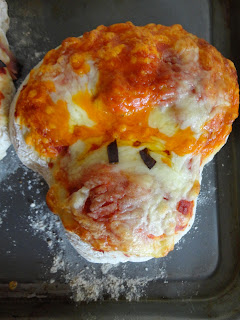 Big Boy knew what it was as soon as he saw it and got very excited because even though he hasn't been playing Mario for the last few days (Madagascar on the Xbox has taken over, we're reviewing it and I'll post a review soon but it's fab!) he was really excited and can't wait to show his friends his Friday Lunch.