- July 26, 2014
After we had been to paint our Moneyboxes at Frosts Garden Centre earlier this week, we had booked in two places at the Beach, for Top Ender and Big Boy. We were excited, normally we pop to the beach in Middleton Hall in Milton Keynes Shopping Centre, but this was a beach that was outside, but was still British Weatherproof and not two hours away like the "real" nearest outdoor beach is.

We walked through the garden centre, past the toys (okay so we stopped for a bit) and through the lovely new look restaurant and made our way out to the garden. I didn't think to take a picture of the garden but it was beautiful, and the raised borders were full of edible plants (I recognised Rhubarb) and ones that were ever so pretty. And just behind them was the beach.

The beach was covered over, but in a way that still made it seem like it was outdoors, with floating cotton wool clouds and bunting and seagulls hanging from the ceiling. 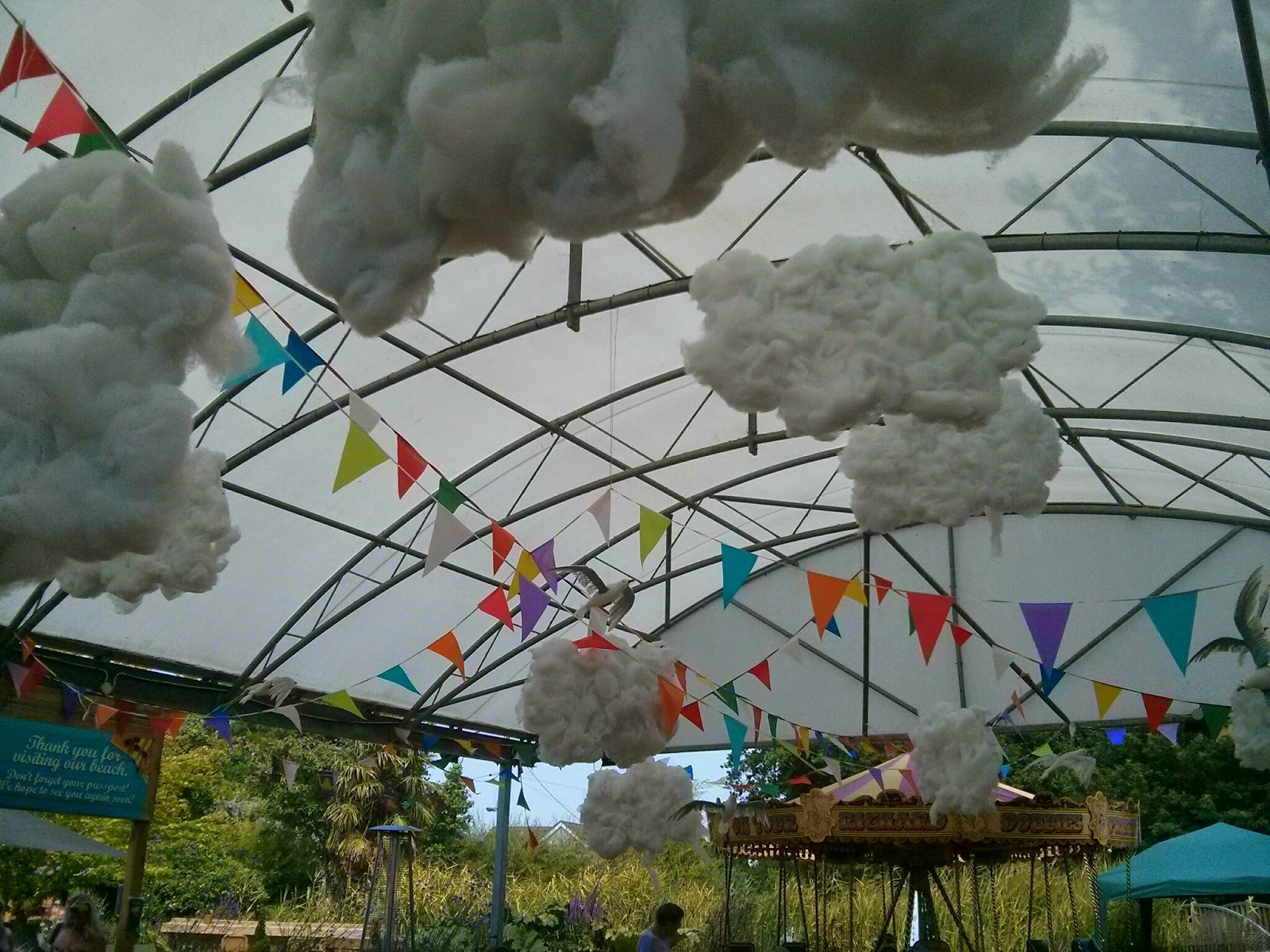 Top Ender and Big Boy wasted no time in taking off their socks and shoes and getting to work building Sandcastles together in the wetter part of the sand. 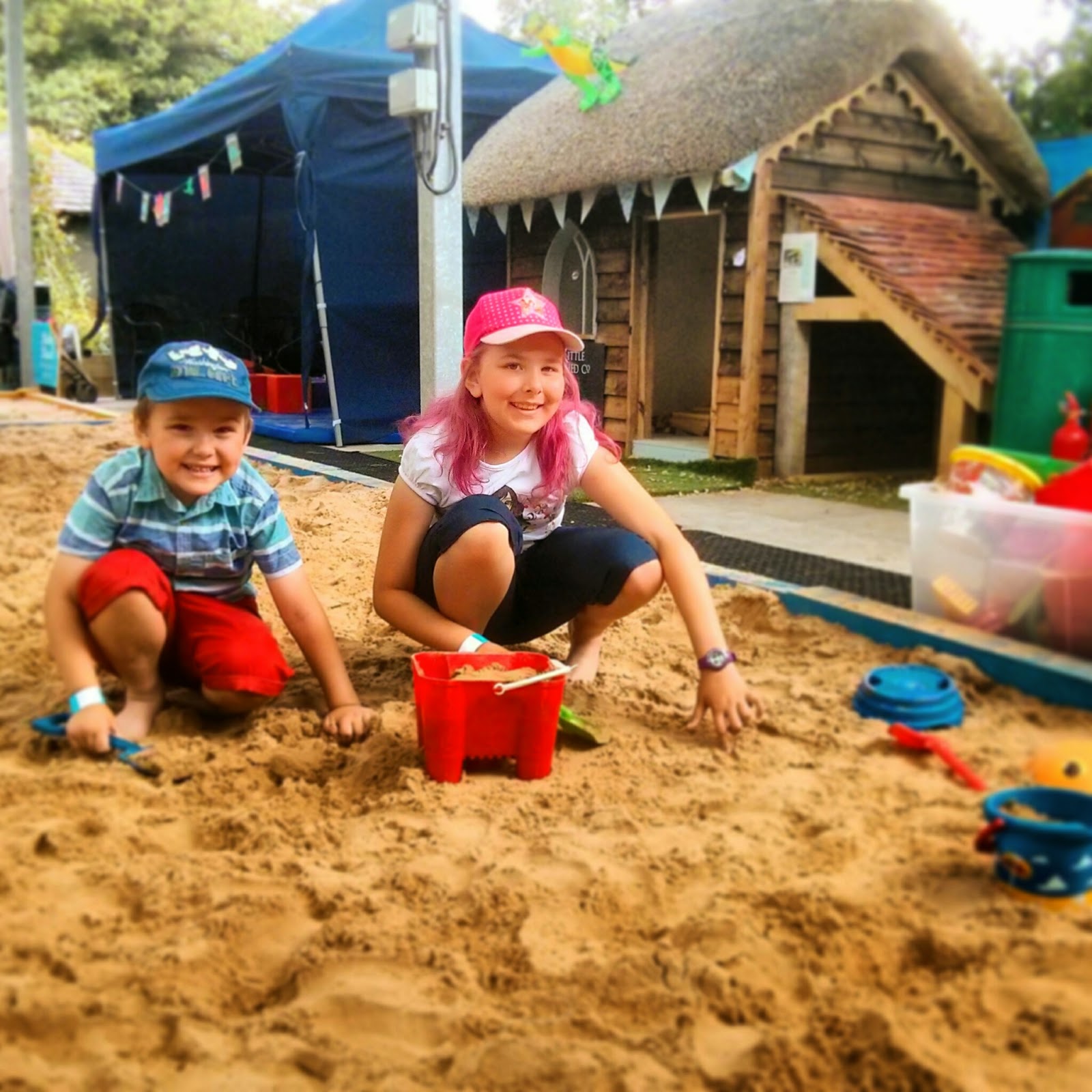 After a story (it was aimed at children younger than Tops but she joined in anyway) where the children had to act like Dinosaurs (the theme this week is Dinosaurs) and a go on the Carousel that is turned by hand, where Big Boy sang "I believe I can fly" for all to hear as there wasn't any music playing they were soon back in the sand. 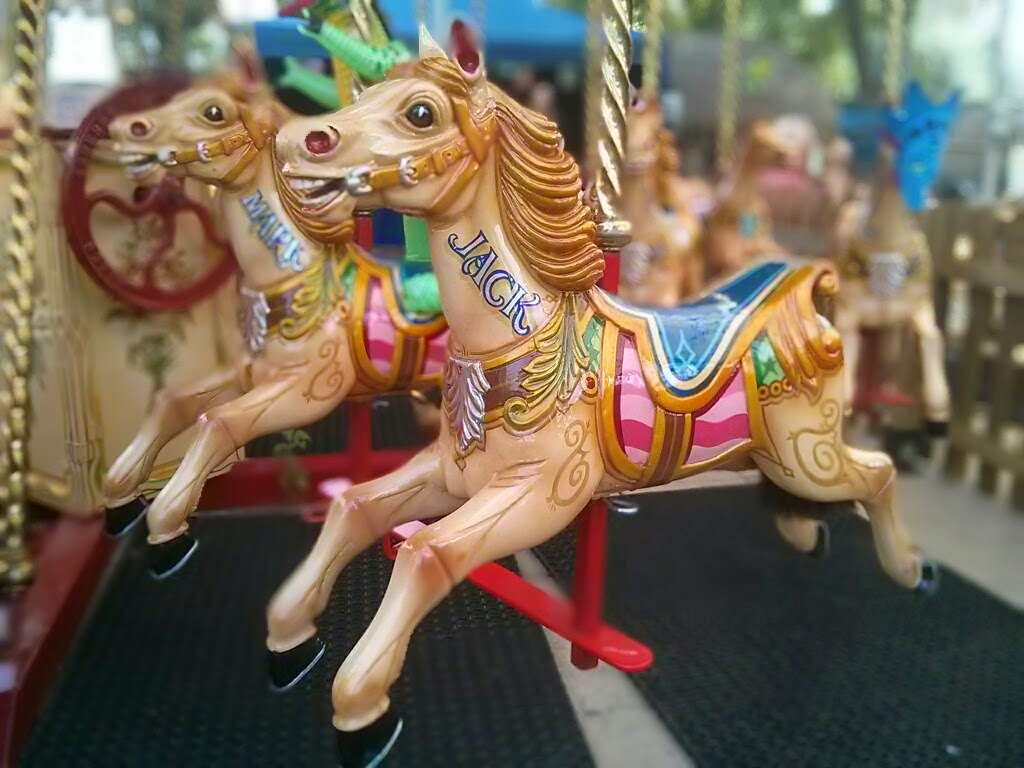 Top Ender decided to be a Sand Angel, and suddenly four or five other small children stopped and copied her, with only one child brave enough to question why Top Ender had pink hair ("Well, I asked my Mum and she said yes and pink is my favourite colour!"), the rest just looking on in awe at a Big Girl having as much fun as they were in the sand. 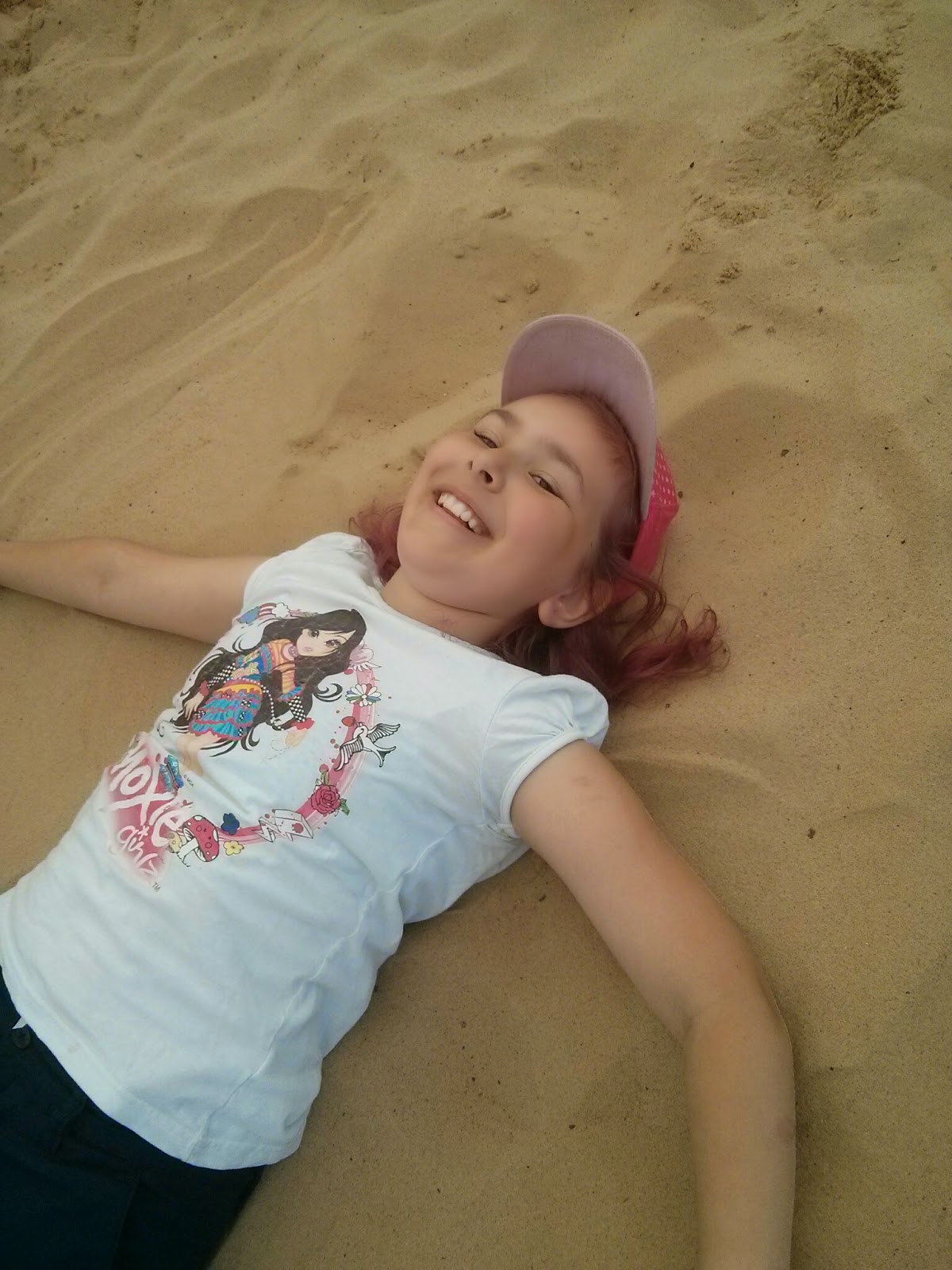 No parent seemed to question when Top Ender started burying her legs in the sand to be a mermaid and the rest of the children started to copy her. 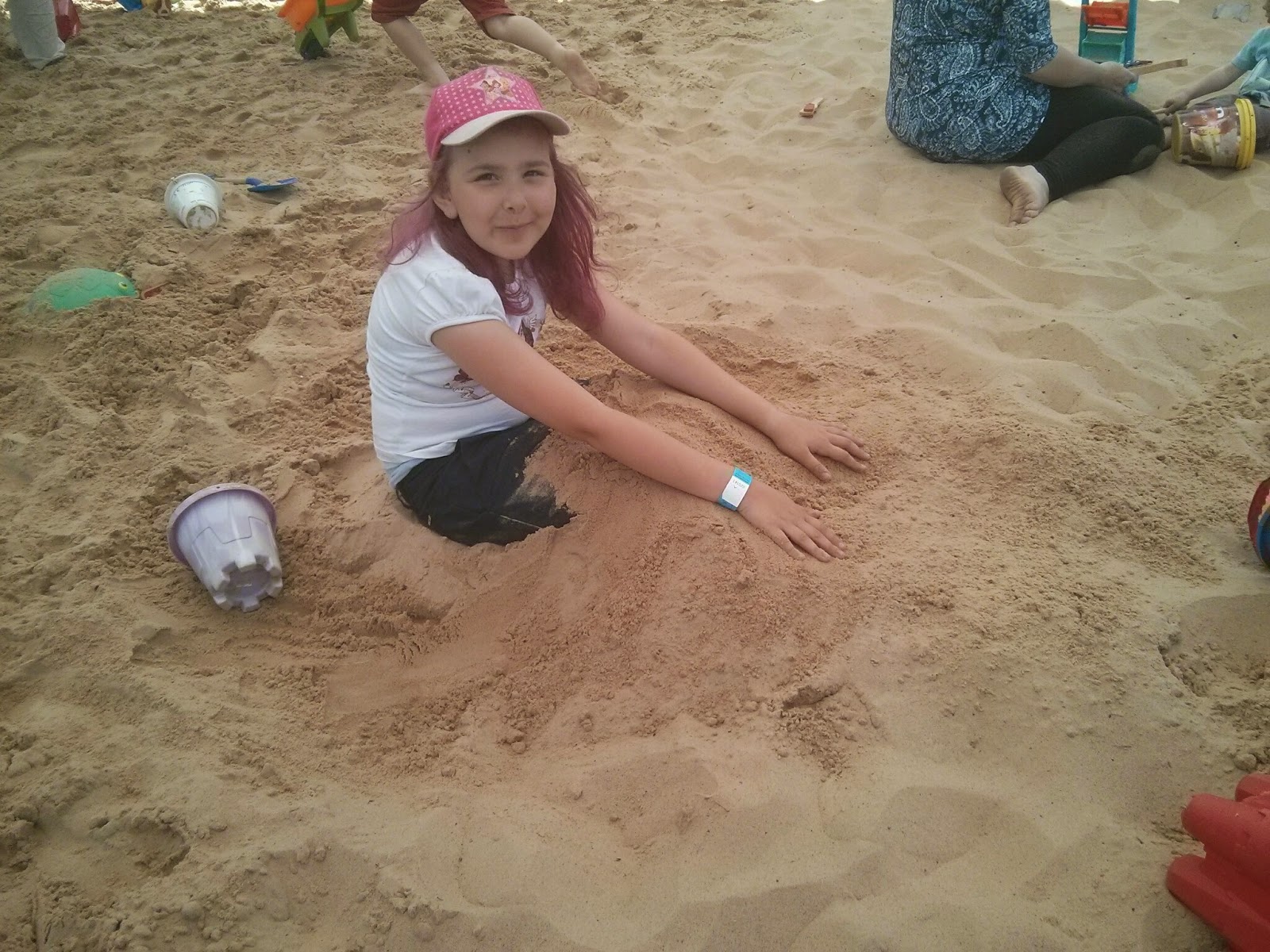 The other children soon joined in when Big Boy started playing with a Beach Ball, for he was with the Pink Haired girl and so surely he was just as cool. 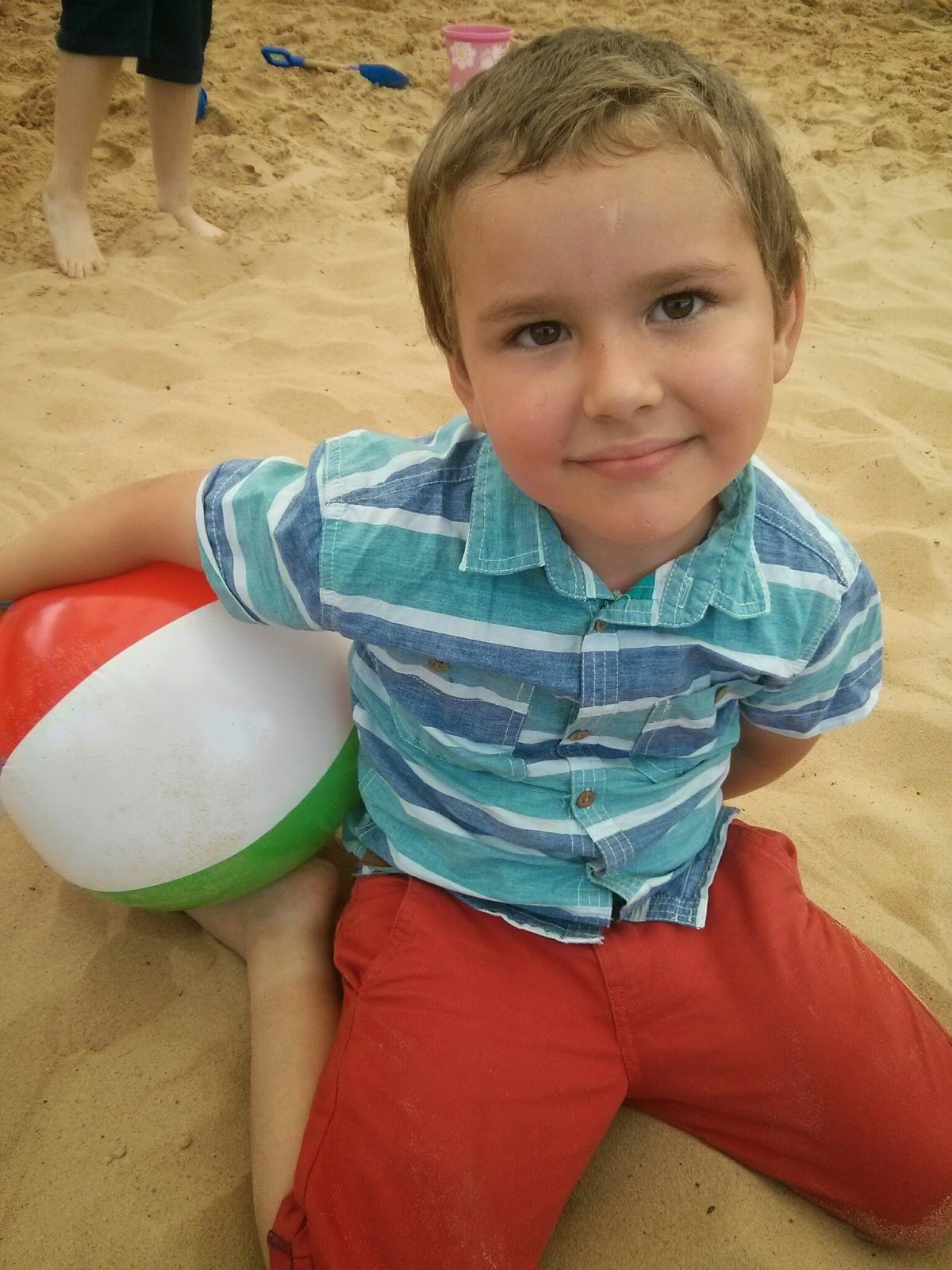 And when Big Boy decided it was time to have some of the unlimited and free Squash and Fruit, suddenly there was an influx of children munching on Apples, Bananas and Oranges and nobody noticed that Big Boy was most thrilled about being allowed a Banana without a blood test. 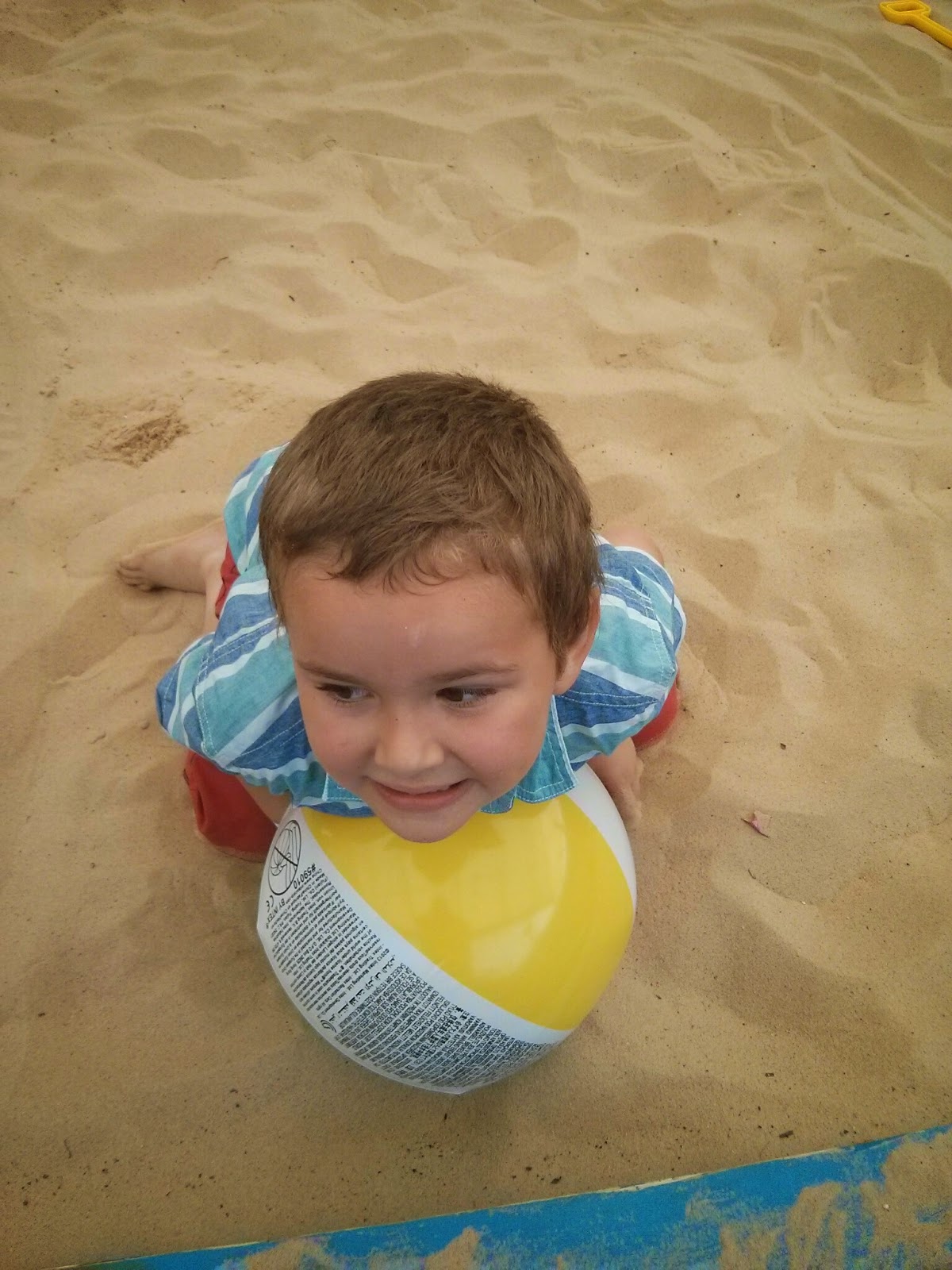 The two staff members (one dressed as a lifeguard and the other in normal Frosts Uniform) were brilliant with the children, and the photograph I have of them playing with Top Ender and Big Boy and other children is pure joy (but unfortunately too blurry to be shared) and I've already written a letter to commend them to their managers for being so brilliant.

Access to the beach can be paid for via the Frosts Website in advance and costs either £4.99 for a two hour session in the morning or afternoon or £6.99 for lunchtime, but lunch is included.

We'll probably head back to the beach after one of our crafting sessions over the next few weeks, but it won't be until I've cleaned all the sand out from the car from this trip!

We were given access to the beach for our review.
Family Life Paid Day Out Review Summer