- March 30, 2012
On Saturday morning Big Boy asked Daddy to google something for him. He wanted Daddy to look up "Parks in Milton Keynes" as he wanted to find somewhere for us to go as a family that afternoon. It was so sweet that Daddy agreed and they found the Parks Trust website and that is where Big Boy saw a picture of Campbell Park and decided that was where we should go. It sounded like a good plan and so we set off after lunch on what was the hottest day of the year so far. 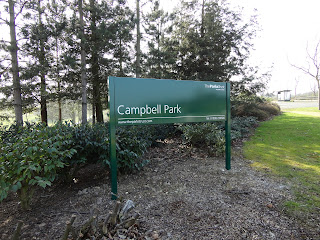 Despite having lived in Milton Keynes all his life, the only times Daddy has been to Campbell Park is to watch the fireworks or for the Open Air Cinema. Even Top Ender and I have only been one other time and that was when we were trying to watch the sun rise and seeing as it is right next to the Shopping Centre we have no reason for not having been before or knowing that much about the park! Still we knew Campbell Park is big, it's where several of Milton Keynes festivals and events are held, there is a cricket ground and an amphitheatre and it has stunning views into Bedfordshire.

We started our walk by walking past the Cricket Ground. Big Boy seemed very excited about the explanation of how cricket is played and we have promised that we will go to a match as soon as we can, although we aren't sure that Big Boy quite understands that he is going to need to sit down and won't actually be joining in with the playing. There is a sculpture that was designed to be a Shadow Caster at this end of the park, to me it looks like a ball hitting cricket stumps so I think it is rather aptly placed, but I don't think that is what the creator intended people to see it as! 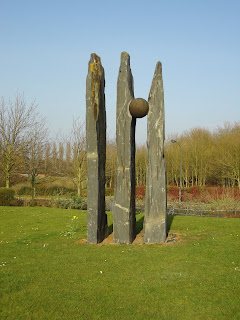 Carrying on up the Park we got to the more formal gardens and Tops was really excited about coming back when there were more flowers blooming. She loved the "Chain Reaction" sculpture that is in the park and remembered from a leaflet that we picked up a few weeks ago that it is part of the Milton Keynes Art Trail, which we are going to walk soon! 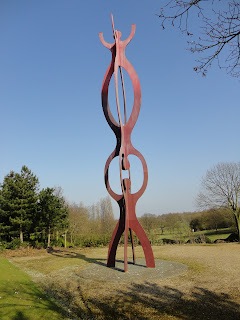 Big Boy was loving that he was in charge of this trip out and was leading the way. Despite not knowing where he was going, he managed to lead us up to the labyrinth and Sundial (okay so maybe Daddy was giving him a little guidance). It was great fun watching Top Ender and Big Boy walk all round the labyrinth following the twists of the path, and even more fun watching Daddy and I trying to work out what the time was according to the Sundial. 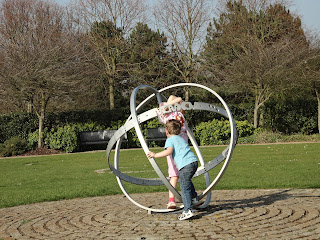 With the weather having been so nice there were a lot of families enjoying the park. There were picnics going on, sunbathers, people riding bikes, several games of Frisbee and Football happening, other families walking, others just enjoying the views but it wasn't crowded and everyone seemed to be in a good mood. I was a little disappointed that there weren't any sheep grazing in the park (I love Milton Keynes for the grazing Sheep and Goats you can find in some of the Parks) and after having agreed that Top Ender could roll down the hill saw plenty of dried evidence they had been there stuck to her back. At least we know why all the flowers bloom so brilliantly. 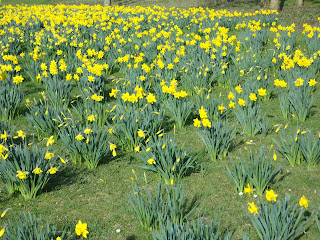 After our walk we went down to the Grand Union Canal to look at some of the Narrow boats, to have a drink and to relax as we soaked up some of the late afternoon sun. The walk had been quite long and we had experienced a part of our home town that we had managed to miss before so we had a lot to talk about. We really loved Campbell Park and will be making it a regular walk from now on.
Free Days Out