- March 11, 2012
I love Sweetcorn. I came up with my own recipe for Sweetcorn Soup (like you can buy at the Chinese), I will regularly have Sweetcorn instead of Baked Beans (Only Tops likes Sweetcorn like me, but she also loves Baked Beans which I don't) but I don't buy a lot of sweetcorn cobs, which is a shame because there isn't anything better than eating sweetcorn off a cob! We were sent some Sweetcorn Bites, which are packs of eight bite sized sweetcorn cobs and grown in the UK too. The cobs can be microwaved, boiled on the hob and eaten raw and as the packs can be frozen and defrosted when convenient they are good for putting in Top Ender's lunches! 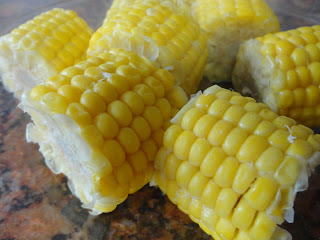 The Sweetcorn Bites are really easy to cook as you just cut the corner of the bag and throw them in the mircrowave and they kept at a good heat in Top Enders Bento Box when she took them for lunch one day. She said that all that was missing was the butter that I put on the hot cobs we eat at home but they tasted really sweet and so she didn't mind too much! I did give them to her again with some spaghetti so that she could eat them cold and again she said that it was the butter that was missing.

Top Ender has been eating the rest of the Sweetcorn Bites with butter as a snack with me on our Date Nights and is quite happy doing so!

We were sent some Sweetcorn Bites to review and Top Ender has had to fight me for them! You can buy them in Tesco and Waitrose.
Food Packed Lunch