What to do with Easter Leftovers - Hot Cross Buns

- March 29, 2012
I don't know about your house, but we love Hot Crossed Buns here but they sort of get a bit forgotten when the Easter eggs are on offer and so we end up with a surplus of leftovers. And then we might see some in our local supermarket for a really cheap price and forgetting that we already have enough to feed a small army we buy some more and before we know it the hot cross buns have multiplied like bunnies and are threatening to take over the kitchen! 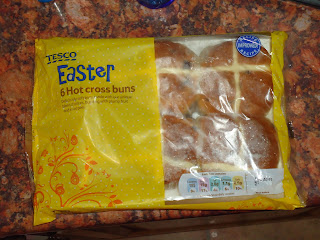 So every Easter I start to think up ideas about how to use up the Hot Cross Buns and here are a few suggestions for you!

Instead of bread use the hot cross buns, they cut quite well when they are a bit stale!

It's the same as normal bread pudding, but erm with chocolate bits (such as left over Easter Egg) in it!

My favourite recipe for this is to take as many buns as you are serving people, cut each bun in half and spread with chocolate spread. Put in an oven proof dish and scatter some chopped chocolate all over before pouring over home made custard (or shop brought!) and baking in the oven for half an hour on about gas mark 4. YUMMY!

A variation of this is the Jamie Oliver version.

Everyone saw the Sainsbury Advert a few years back right? Cut a hot cross bun in half, spread Marmalade on it, put it in a ramekin pour custard over it and bake and eat. I didn't like it though...

Grill a bun cut in half and then butter it. Then cut some poached fruit over the top sprinkle some sugar on top and put it back under the grill for a second!

Melt up those Easter eggs, and dip in bits of the hot cross buns! 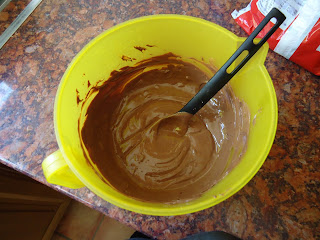 I know Trifle is a Christmas food, but I love custard, whipped cream and banana. Just don't had coloured sprinkles!!!!

Load it up with butter, whipped cream and decadence is yours on a plate. If you have a bit of edible gold leaf floating around add that too and then invite me.

I don't actually know if this really is French, my neighbour used to make this when I was younger and she was French... although saying that her husband was Welsh so maybe it is welsh. Anyway.

Crumb the buns (use a food processor it is quicker!)
Add dried fruit and custard to make a disgusting looking mix (it get's nicer honest!)
Pour it into a lined dish but don't worry if it looks messy
Bake for half an hour on Gas Four or Five (until it goes crispy) and serve in strips with Whipped Cream and icing sugar.

Now this only works if you like Mature Cheddar, but I did have it with some Brie and it was quite nice. Slice some Mature Cheddar (stronger the better) and place on a toasted and buttered Hot Cross Bun half. Place under the grill so the cheese melts and then eat! The mix of the spice and fruit contrasts nicely with the Cheddar. Honest! 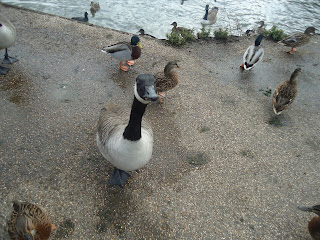