- March 04, 2012
Big Boy is really into drawing Maps at the moment. He loves to sit down with a piece of paper and to draw paths and bridges and crossroads and stiles and anything else he can think of that we have seen on our walks or drives in the past. The problem is that his drawings aren't really that accurate and I am yet to find somewhere that has all of these things in one place, but it's the thought that counts I am sure! Last weekend BB made a map and when we said that we were going out for a walk he said we had to take his map with us as it was a map of where we were going to walk. We followed the map from the car park at Shenley Woods and set off around the paths. As it had been wet during the week we decided to stick with the metalled paths and luckily Daddy's reading of the map agreed with this! There was only one point where we weren't sure where we were going as everyone thought it was a different direction after looking at the Map... 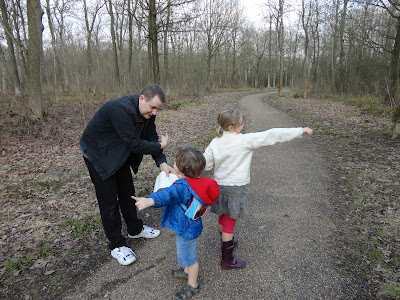 but we were soon on the right path again.

It worked out as a very short walk because the metalled paths were just a plain loop instead of the longer paths that cut through the woods but this pleased Big Boy because he had decided that we should have a picnic and he had a backpack full of crisps which were getting heavy! We ended up eating the picnic in the car with some of the Orange juice we keep in our car for when we are out and about having an adventure. 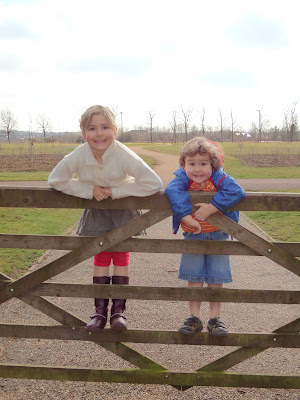 Having a map was a great way to enjoy our walk and it is becoming a bit of a game now with everyone making maps of places they want to go, but not telling anyone where it is that they are drawing a map to. I have drawn a couple of maps taking Big Boy and I to the local shop on different routes, using different roads. I've been letting Big Boy decide which way the maps show us to go, which does mean we have made the odd wrong turn and so far we haven't found anything amazing hidden just round the corner from us, but we are finding out a lot of detail about our surrounding area!

Using the maps is a great way to teach children how to read maps and to pay attention to their surroundings and I personally think that map reading skills are very important, a necessity even, in this modern world of GPS.
Family Life Free Days Out Review