- March 03, 2012
Top Ender has finished her World War Two project at School and has moved on, with the rest of her year, to Inventions. She came home during the week clutching a small paper helicopter that she had made and wanted to show everyone else how to make one and so here is a Top Ender Guest Post!

Hello! I really liked making the Helicopters at School this week and thought that other children might like to make them, so this is how to do it. The first thing we did was cut out a piece of paper that was 16cm long and 4cm wide. 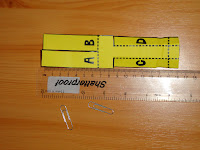 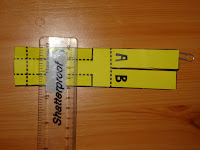 My teacher had printed on a big piece of paper lots of lines and letters so we could fold things easily but Mummy says that even if you don't have the letters it is easy to fold, you will just take a bit longer. The line between A and B is 7cm long and the A and B strips are 2cm wide. The part that you cut on C and D are 1cm and are 7cm up from the end. Then you want to score the other lines to make it easier to fold. The lines that need to be scored are across the ends of strips A and B and is 7cm down from the end. The folds down C and D and 1cm from the end and 1cm from the end to the cuts which are 7cm down from the end of the strip.

When you have cut and score everything you fold lines C and D into the middle. Mummy says it makes it look a bit like a clacker! 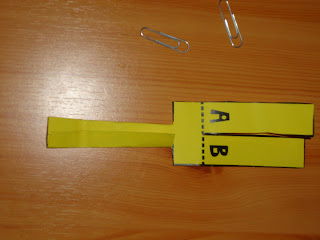 I used two paper clips to hold the fold in place and it also adds a bit of weight to help it fly better. 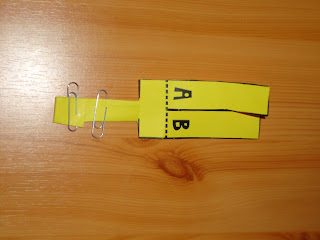 Then you fold the A and B flaps in opposite directions and the Helicopter is ready to throw! 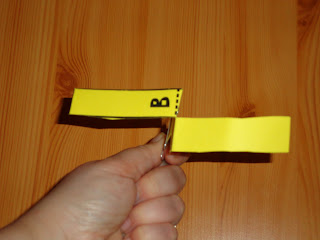 I'm not going to tell you the best way to throw the Helicopter, you have to find out for yourself, but try standing on something, throwing it at different angles and even trying different methods for letting it go. I hope you have lots of fun playing with your Helicopters and thanks to Mummy for letting me post!
Craft