- March 24, 2012
We have two regular post people here at A Mothers Ramblings. There is the Post Man who brings bills and the general mail (we chat a fair bit, but he isn't my favourite person due to the aforementioned bills that he brings) and the Post Lady who brings the big parcels too big for the regular post. The Post Lady always greets me and BB by name and has a giggle with us over what is being delivered. This week when I was out at the Regis Salon in Oxford Street, being made to look beautiful with a new hair style, Daddy was at home with BB when the Post Lady came. She was a little shocked to see Daddy instead of me, but handed him the parcels and had a joke with him and was soon off on her merry way.

Unlike me however Daddy didn't then rip open the packaging there in the hallway but left the parcels to one side so I could open them when I returned later that day. I wasn't sure what was being delivered, but opened it up to find a parcel from Warner Brothers to celebrate the release of Happy Feet Two on DVD. 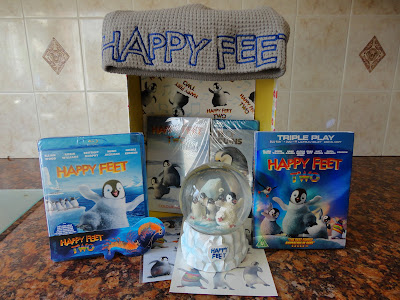 I thought that we would watch the Happy Feet Two film on our Sunday Night Family Night, but on Friday night Daddy needed to work a bit late and so as a treat Tops, BB and I started to watch the film during their dinner. BB had been up since 5am, and was soon fast asleep but Tops and I watched the film together and when Daddy came home he watched the last ten minutes or so with Tops and I trying to catch him up with the plot.

The film is what you expect for a family film, there is a message that being who you are is what is important, some mild peril and a lot of fun. I cried several times, laughed almost non stop and smirked at a few of the jokes that were going over Top Ender's head. There is a great cast of voices and I had to look up a couple of them as I just couldn't place them, but was quite happy when proved right about several of the other voice actors.

Tops loved the film and has asked if we can watch Happy Feet and Happy Feet Two back to back one night. I'm just waiting on her realising that in the box we were also sent some temporary tattoos, (I think the ones of Will and Bill will magically appear on my arms this weekend) as well as some magnets which she is going to put on her locker at School. And as Big Boy fell asleep watching the film it wasn't surprising to me that on Saturday morning one of the first questions BB asked was if he could watch the film as he couldn't remember what happened after he fell asleep!

You can pre-order Happy Feet Two from Amazon as it isn't released until the 26th March, for £9.99.

We were sent the parcel by Warner Brothers.
Review