A Family Walk At Sharpenhoe Clappers

- March 24, 2012
When we won the MADS Best Blog for Family Fun last year (You can nominate me again if you like), part of the prize was a family membership to the National Trust. This has led us to be frequent visitors to the National Trust website and it was when Daddy was looking at the website for somewhere for us to go for a walk that he found Sharpenhoe Clappers. 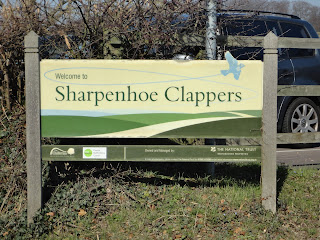 Sharpenhoe Clappers is a chalk escarpment in Bedfordshire, and despite being just under an hour away from us and having driven past it several times we had never been. We set off on a very early Spring day and it was so warm we abandoned our coats to the boot of the car before we set off on our walk around the woods.

We set off and as we walked we started looking for different signs of the changing season and the everyday nature that was around us. We spotted hundreds of ladybirds and had a great conversation with a couple who were just finishing their walk. 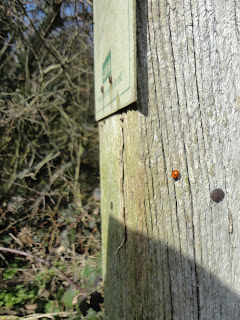 As we were walking round the children spotted lots of bits of chalk on the ground and kept an eye out for the ghost which local legend has living in the woods. Daddy explained all about how the ghost was supposed to be Cassivellaunus who was a British Chief who defended Britain against the Romans during the time of Julius Caesar. During cloudy weather the top of the escarpment sometimes looks like it is magically hidden in the clouds which has given rise to the local legend. Big Boy was all ready to defend us from the ghost, but was rather pleased that we didn't find any.

We had Top Ender and Big Boy also looking out for evidence of the iron age settlement and for more rabbits holes (Clappers is derived from a Latin word for Rabbit Warren) and they both managed to keep surprisingly quiet at times as they tried to spot rabbits, but we decided that the rabbits must have all gone on holiday together as we didn't see even a whisker!

We were amazed at the views from Sharpenhoe Clappers and with a quick check of our position according to the GPS on our phone we were able to confirm that it was Milton Keynes we could make out in the distance. It was quite nice knowing that even though we were miles away we could still see home. 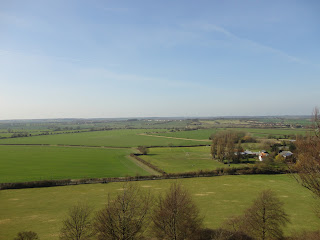 We all really loved walking round Sharpenhoe Clappers and know that there are other walks (Icknield Way crosses the Clappers on its route from Ivinghoe in Buckinghamshire to Knettishall Heath in Suffolk) in the area that we could at least walk part of and so we will be heading back in the near future.

If you are in the area then head on up to Sharpenhoe Clappers and make the most of the beautiful views.
Free Days Out Spring