- March 11, 2012
I promised ages ago I would do a tutorial on how to make the Rainbow lunch, but I didn't have a chance to get round to it until now. Top Ender really loves her special lunches and I've been using them to make sure that she is getting more portions of fruit and veg a day than the five that the Government recommend we get on a daily basis. Luckily she takes after me with her love of fruit and veg and eats almost everything. The brilliant thing about fruit and vegetables, other than the wide range of textures and flavours, is the rainbow of colour that exist and it makes creating a Rainbow Lunch really easy. 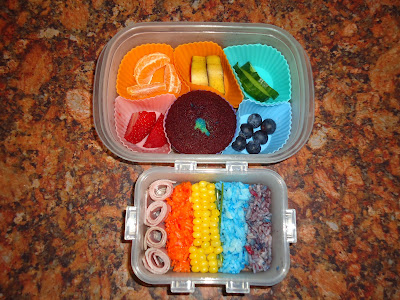 I used my coloured silicon cupcake cases to emphasise the colours for the fruit as it was only small portions being used as I am always tempted to put too much into Tops lunches! I put Indigo and Violet in to the lunch box as one colour as they are similar and finding Indigo and Violet foods is rather hard! In the "pudding" box we had;

Creating the savoury part of her lunch was so simple you are all going to kick yourself for not having worked it out. I simply cooked one portion of rice and then using three of my Ikea bowls (to keep track of the colours I wanted) I added food colouring to the rice and mixed! I did think afterwards that I should have used grated carrot for the orange, but hindsight is a marvellous thing. For the savoury we had;

My thinking with the savoury was that Top Ender would use her fork to mix it all around so that the chives and sweetcorn would mix up with the rice and ham to create a mixed lunch. I wanted her to have the visual impact of a rainbow which is why I didn't mix it up before sending her off to School. And that is the big thing about food that I am sure everyone will agree with, when food looks visually pleasing you are more likely to want to eat it and using a rainbow of colours not only increases the visual aspects but it is better for you as different colour fruits and vegetables have different nutrients, which are important to our overall health.

The important thing to remember if you are going to recreate this at home for your family is to use foods that you know your family like. As tempting as it is don't put new foods in just because they fit for colours or foods that they don't like to eat as they won't be eaten and having a hungry child at the end of the day because they didn't eat their lunch is a bad thing!
Packed Lunch