- June 12, 2012
Food is a huge part of our life, if I'm not cooking it, eating it, planning what we are going to be cooking or eating or shopping for it then I seem to be blogging about it... and that's exactly what this is. During half term we visited our local Beefeater in Milton Keynes for an evening meal, I don't actually ever remember having been to a Beefeater before but having looked at the menu online there seemed to be a good variety of food to chose from. 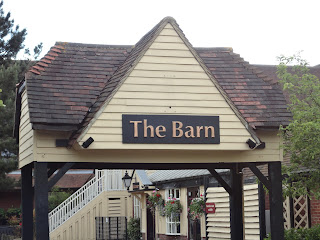 The hostess took us to our seats, I was a bit worried as we went up several flights of stairs, but we were given a table which looked down over the main seating area and we could see into the kitchen so were able to watch for our meals being prepared too. We ordered our drinks which arrived as we were still looking at the Menu. They arrived really quickly and brought us some time as Daddy and I were dragging our heels over what we were going to order! Eventually though we ordered. The children both ordered a melon and orange starter and Daddy and I ordered a sharing platter of Nachos. 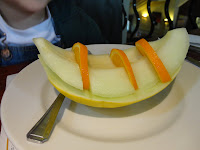 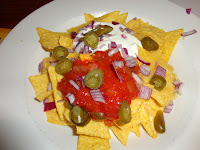 Now we assumed that the Nachos that were on the Children's menu were the same Nachos that were on the adults menu (apart from the toppings obviously) but as the Adult menu doesn't specify what is Gluten free and what isn't as the Children's menu it was down to our server Jan to confirm everything for us. Jan, was able to answer our barrage of questions about how things were prepared, how we could change things and what some things might contain (seeing as Daddy is Celiac and so can't eat Wheat), but a simple update to the Menu would have allowed Daddy and I to have made these choices as easily as we would if we had chosen from the Children's menu.

The Children's menu is fantastic, there is a lot to choose from and it is helpfully sectioned so you choose a main part, and a couple of sides. Big Boy ordered a plain pizza and asked for fries with it, but decided that he didn't want a second side. Top Ender went with a ham and pineapple pizza, with a side of Garlic Bread and a Corn on the Cob. 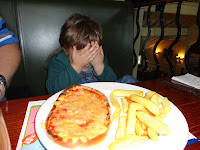 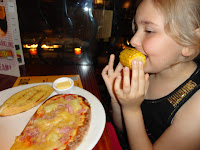 I wasn't that impressed with the Pizza, it looked like it was a pitta pizza and Top Enders had far too much cheese so it didn't to me seem as cooked as it probably should be. Tops didn't care though and said it was quite nice, although she didn't eat it all. Big Boy also didn't all of his meal, again it wasn't because he didn't like it but because the portions compared to what we have at home were quite large. 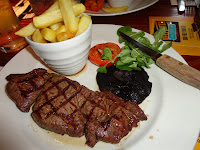 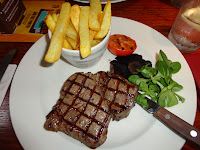 I loved the idea of bottomless chips but both Daddy and I thought that the serving we were given was enough, plus we are trying to lose weight so we didn't want to eat too many! The spicy chips weren't that spicy (Jan had confirmed for me that they weren't that spicy which is why I ordered them) but I could have done with a bit more salad on the plate. Daddy said that he saw the Salad being put on the plate, it was from a big bowl so he thought they could have put a bit more on to make the plate look more full.

Daddy and I both finished everything on our plates, Daddy loved his steak and said that it was the best steak he has had cooked in the UK (He loved the steaks he ate in Chile and there was a Steak in France that was divine) and although he thought that the portion was a bit small compared to the price, I thought it was nice to be able to finish everything that we had ordered. Plus, there was space for pudding!

Tops and BB both chose a Chocolate Challenge, which they enjoyed but both left the Brownies because they didn't like the taste of them. 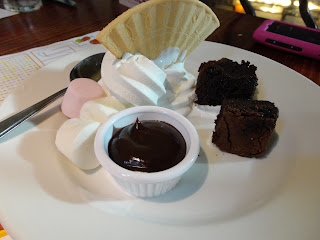 Daddy and I both went for Sundaes, Tops actually chose mine for me because I can't ever make my mind up, and Daddy went for what we guessed was the only Gluten Free option (other than fruit salad). The sundae glasses were quite narrow, which pleased me because it meant that you didn't get a lot and so that's less calories and meant that as we left the restaurant we didn't feel uncomfortably full. 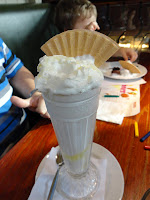 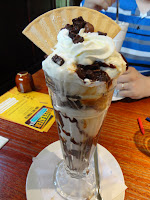 Big Boy wanted me to point out that the crayons he was given weren't good crayons because the picture needed brown and he wasn't given a brown crayon! Tops also thought that the worksheet wasn't as good as it could be for older children, but she did love the colouring, and as there was free wifi she was able to hook her phone up to it and was surfing the internet.

I had never thought of the Beefeater being a family restaurant, but there were lots of families there and the children's menu was really geared up for different tastes and ages. I think that we will be going there again and as it was only just over £50 for the four of us (£55) for three courses and drinks I think it was a decent price.

We were given £50 towards the cost of our meal,
Gluten Free Restaurant