- June 06, 2012
After having made the Turkey Pin Wheels with Peppadew Peppers I said that I thought it might taste nicer with Spinach and Cream Cheese and so I waited a couple of weeks before putting it back on the menu plan. Then I saw the Britmums Lean on Turkey competition, sponsored by www.leanonturkey.co.uk and I thought I should enter the recipe into this because it was rather tasty! Look, doesn't it look tasty? 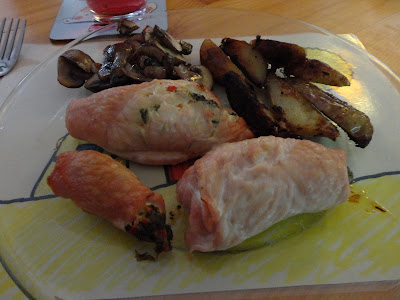 The first thing I did was defrost some spinach in the microwave (two circles as that is how they were frozen) so I could let it cool whilst doing the rest of the meal prep. I could have used fresh spinach, but I wanted it to be cooked before adding it to the filling and this was just quicker. I had a packet of Turkey Quick Cook Breast Steaks which I again bashed thinner using my rolling pin, these steaks hadn't been frozen like last time and so I found that they were a lot easier to thin and they didn't break apart. They also seemed to be twice as big this time, which was a good thing as there looked to be a lot of filling. I threw some of the peppadew peppers into my food processor with a few leftover cherry tomatoes and let them be finely sliced and mixed together. I thought that the cherry tomatoes would be good to add to the mix so that there were more vegetables in the meal, the sweetness would be a nice contrast to the heat of the peppadew peppers and I like cherry tomatoes! I also thought having them finely sliced and diced like this would be nicer. I liked the original pinwheels that I made, but it was too hot and chunky for me. I then seasoned the mixture with salt and pepper and added two tablespoons of cream cheese to blend everything together. 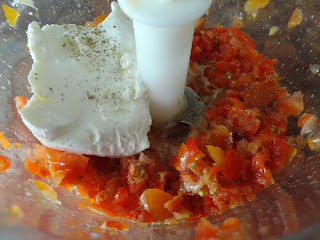 Just after I took this picture I added the spinach so that it would blend in too. You also want that finely chopped. I placed a tablespoon or two of the mixture on to the Turkey breast ready to roll it up. I did have toothpicks ready to hold the rolls shut, but they rolled up nicely this time! 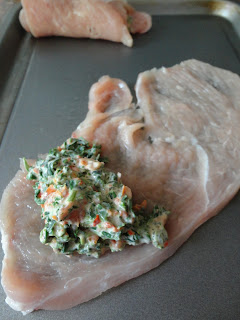 Once all the Turkey breasts were filled, I put the tray of Turkey Pinwheels in to the over for just over thirty minutes as gas mark 4. 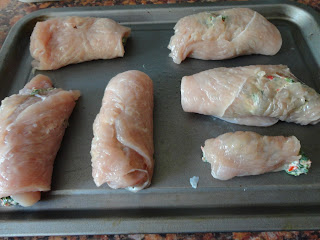 There was a lot of filling left over so I made an executive decision that the filing could also be the filling for the Twice Baked Jacket Potatoes that I was planning on making. I had cooked triple the amount of jacket potatoes the evening before planning to make Twice Baked Jacket Potatoes for the freezer and also to turn some of them in to Jacket Potato Wedges to serve with dinner, so with a little bit of scooping and mixing we soon had two meals ready. 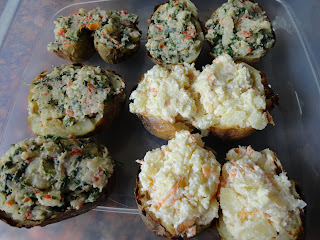 I'm planning on eating the Twice Baked Jacket Potatoes of Thursday this week, so I'll let you know how the filling tasted then on the A Mothers Ramblings Facebook Page!
Main Meal