- June 20, 2012
I don't think there is anyone who hasn't seen the film Sister Act or who couldn't tell you what the story was about, so when Daddy and I saw that the Stage show was coming to Milton Keynes Theatre we were quite excited. We love the film and thought that a Musical version would be fantastic.

Despite three of the main cast being played by understudies the show was one of the most upbeat, toe tapping, happy productions that Daddy and I have seen in a long time. There are a few changes to the film story, and there is all new music for the show too, but the changes make sense and the music is fantastic. I've been humming a few of the songs since leaving the theatre and I'm after a cast recording to add some of the tracks to my work our playlist! 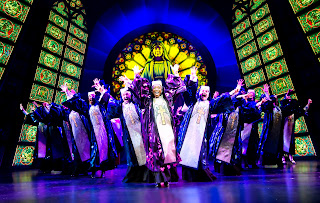 The entire cast were fantastic, although the show was stolen for me by Curtis's Goon's (Curtis is the bad guy!) whose comic performances were laugh out loud moments. A lot of the religious jokes seemed to go by unnoticed by some of the audience, but it made me realise how well the show is written.

I'd be very tempted to go again to see the show, because it's the sort of show where you can watch it more than once and find something new to marvel at. It is billed as being a family show but if you are taking young children be warned there are a couple of swears in it that caught me off guard.

Milton Keynes Theatre provided me with tickets to see this show.
Review