- June 15, 2012
It should come as no surprise that today's Friday Lunch is a celebration of Top Enders recent Guinness World Record Achievement. Tops has been on the radio, received her certificate in the post, been given a lot of fuss over by all her relatives (well that happens anyway) and today it happens all over again as her School are going to tell everyone during assembly about what she did in her half term. I think that we will always be thinking about the Thomson Family Holidays event and how it cheered up what was a rainy half term!

To celebrate today though I thought I should theme Top Enders lunch in to what must be the easiest lunch I've ever made. 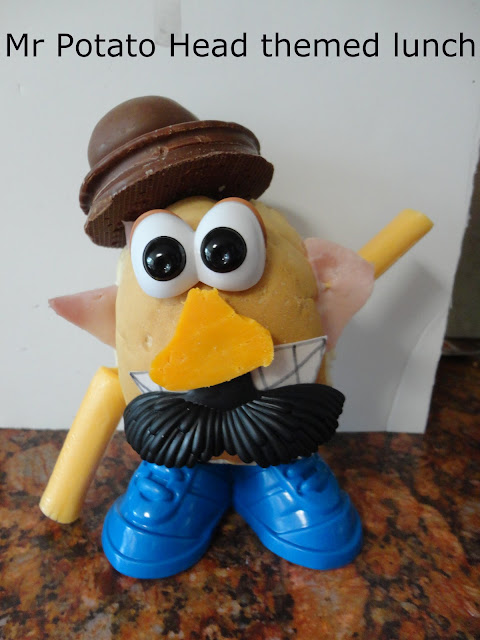 I started by finding a nice soft roll that was the shape (roughly) of Mr Potato head and making it a nice ham roll. I cut out some ears from ham, a nose from cheese, some teeth from rice paper and he has some arms that are cheese strings too.

I had originally planned that his mouth would be marshmallows and his eyes be eggs, but they didn't look right so poor Mr Potato Head had some of his parts stolen! His hat is a teacake on a wagon wheel, a lot more chocolate than Tops is normally allowed during lunch, but hey it's a Friday! 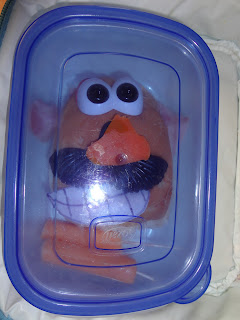 We did have to take his arms off to fit him in the lunch box and we had to remove his feet and hat too, but I think squashed up he still looks just like he is supposed to! Tops has already seen him and loves him, and is ready to eat him all up at lunch!
Packed Lunch