- June 22, 2012
So with Daddy suggesting that I make a rocket for Top Enders lunch this week, I was thinking about flying things and thought the best lunch would be a Ladybird! We have seen a few around this year and Top Ender has been talking about having a bento lunch of lots of little ladybirds. I think she is hoping to make them out of grapes or similar (I do have an idea, but I don't have the time at the moment) but I thought it would be a lot easier to make a ladybird out of a burger bun! 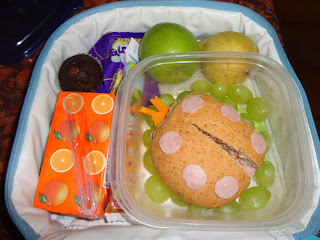 As you can see Tops is still eating a few portions of fruit everyday, there is a frozen yoghurt and some cheese spaghetti (she doesn't like it as much as real cheese or the sticks) and she has a choc chip muffin because it is Friday!

Making the ladybird was really easy. Take a burger bun butter it, add ham for a filling and then split the top bun into wings. I did cut the bottom bun to make it a more manageable size, but you can't see this. I used my apple corer to cut some circles from ham to place on top of the bun and using a slice of cheese cut out the ladybirds head and antenna. 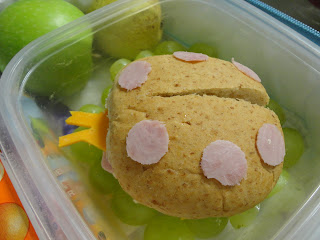 The ladybird is resting on a layer of green leaves, which are really just a portion of green grapes cut in half, but I think that Top Ender rather than this little bug will find them very tasty!