A Guinness World Record Holder Lives In This House!

- June 08, 2012
We went to Whipsnade Zoo yesterday, we were invited by Thomson Holidays and they had asked some of the Guinness World Record team to be there to be adjudicators for some World Record attempts. We had a great time trying out the different challenges and were getting quite good at some of them when we broke for lunch. After lunch all those with the best times or highest scores got a chance to break the records. Tops had one of the best times for the blindfolded assembly of a Mr Potato Head, despite having never played with a Mr Potato head prior to that morning and so was eager to try to break the record.

As is the way with modern parenting I videoed Top Enders attempt at breaking the record for posterity and was pleased I did when she went and broke the record! My Top Ender is a Guinness World Record Holder!


Tops was over the moon to have broken the record, but I don't she really understood just how big a deal it is. I mean Tops is a World Record Holder, that is huge right? 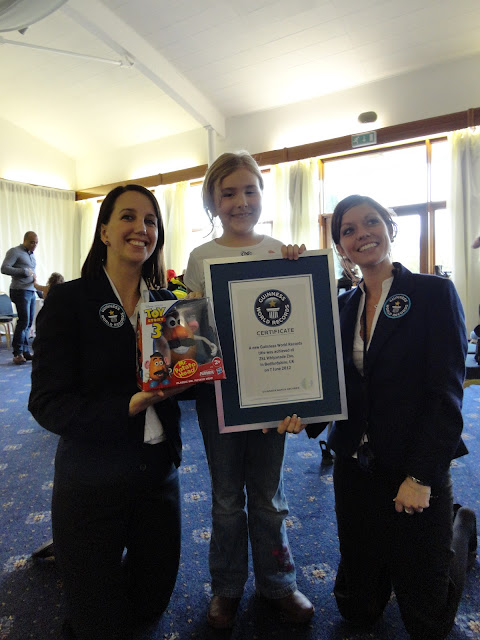 Tops will get an official certificate in the post soon and whilst her record might not appear in the new edition of the Guinness World Records Book or might not be hers for very long, I can't help but think how great it would be to one day to tell your kids or grand kids how you once broke a Guinness World Record.

We received a day at the Zoo and lunch and Tops got to take home a Mr Potato Head and a gift voucher for her win.
Family Life