- June 10, 2012
We are back to School this week and so our lunches are going back to being made the night before, or first thing in the morning depending on if they will survive the night in the fridge on top of a few hours with an ice pack in the lunch box to keep them cool. The plans for this week aren't exactly extravagant, but they are things that Tops and BB do like to eat and offer variety through the week.


I cut the pita bread so that they are pockets as that makes it easier for Top Ender to handle when she is eating them, I grate the cucumber and the cheese and then mix it together before putting it in the pita bread. I don't add any mayo or salad cream as the moisture from the cucumber is more than enough to keep the pita bread and cheese from feeling too dry.

Tops loves having the grated cucumber because she loves cheese and cucumber sandwiches and it's something different, I also find that when the cucumber is grated that it doesn't make the pita bread soggy which is something I always hated when I was at School and had a packed lunch.


When I made the Chicken Wraps last week, I had opened a new pack of wraps and I had a lot of Chicken left over from the Sunday Roast so I ended up making a few of the wraps and then wrapping them up and freezing them. I quite often do this with simple ham sandwiches make up a few at the start of the week, they are then ready to pull out for lunches if we are running late and they also don't require an ice pack as they are frozen and so they can defrost in the lunch box keeping everything else cool as they do.

I had planned to use some leftovers from the pasta bolognese evening meal we had a few nights back as there was enough to freeze one portion but as we are having Lasagne this evening (I posted this weeks menu plan yesterday) I thought that would be an overdose on the carbs for Top Ender and so I thought that it would be wiser to have something else. When I made Top Enders Special Quiche for her Friday lunch she and Big Boy ate quite a lot of it as snacks, but I managed to save a few slices for the freezer. Just like the Chicken Wrap and the Sandwiches that I sometimes make I'm not going to defrost this prior to putting in her lunch box as it will keep the rest of her lunch cool and will defrost ready for lunch! 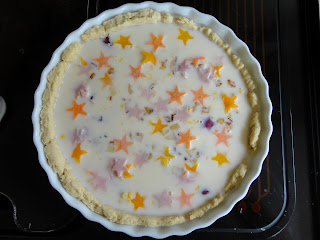 
It's Flag day for American's so today is an American themed Lunch! Come and check on Wednesday night on Facebook to see what it looks like, but just remember if you want to make something the same then you are going to need marshmallows, strawberries, blueberries, hot dogs, hot dog buns and some M&M's too!


The special Friday Lunch theme this week isn't Fathers Day for this weekend but is going to be themed around Top Ender's recent Guinness World Record achievement! I love that Top Ender is a Guinness World Record Holder and even if she doesn't understand just how amazing that is I do and so I'm going to keep mentioning it until she gets it is something to be really proud of!

If you want to make something the same you are going to need cheese, bread, ham, eggs, mini marshmallows, raisins and some Chocolate biscuits!
Packed Lunch