LOL - Actually it's a serious business!

- June 21, 2012
A few weeks back we were sent some cans of LOL to try. I posted about them over on Facebook because they look so cool and also because where I sit at the table is close to the PC so I was able to reach across and post whilst waiting for dinner to be served. 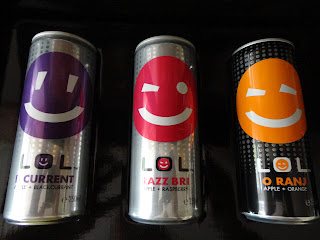 We quite liked the raspberry flavour and Big Boy loved the orange flavour, polishing off his third of a cup quite quickly, so when a few weeks later we were invited to go to The Rainforest Cafe for another try of the drinks and to talk to one of the staff behind the drinks we left Top Ender at School and headed off for the day.


When we arrived Big Boy started chatting to an entertainer whilst I was able to talk to the PR Team, one of the team behind LOL and a nutritionist who I've met before. I did have notes of names, but somehow the piece of paper I had it all on has gone missing. Despite my rather naff note keeping ability, I do remember it was rather intimate and we were told about a lot of different aspects of the drinks, how they were conceived, why they were made the way they were, why they were what size they were and even how in moderation even fizzy drinks can be part of anybody's diet.


I didn't take any photos on the day, as I was far too busy trying to listen and make sense of everything and I was sitting next to the lovely A Modern Military Mother (who I got to meet properly this time) I as aware that she was taking lots of photos, so if you want to see some pop over to her blog to have a look! We carried on chatting over a lovely lunch (I had sea bass, BB went for Pizza as normal!) about everything under the sun and then were sent home with some more of the drinks, and several balloon creations.

When BB and I got home we decided to make some LOL lollies, apparently this is a good way of eating fizzy drinks because you eat them quickly so the sugar doesn't sit around on your teeth. The same goes for drinking through a straw, as that goes to the centre back of your mouth and so for those of us who worry about tooth decay (remember how BB had to have teeth surgically removed?) there are more steps that can be taken.

Will we buy the drinks in the future? Well, if we are in a pub and they are one of the soft drinks on offer then I probably would, if I were planning a special picnic or party for grown ups then I might include them then but I don't think I'll be encouraging Tops or BB to buy them when we are out and about as I'm rather pleased that Tops won't even try fizzy drinks and that they both prefer water too.
Food