- June 10, 2012
I've just finished watching Extremely Loud and Incredibly Close, which had been sent to me to review by Warner Bros ahead of it's release today on Blu-ray and DVD. I had really wanted to go to see the film when it was in the cinema, but Daddy said that he didn't want to see it as he felt that it would be too moving and he hates films like that. So I waited patiently for it to be released on DVD and was rather pleased I did. 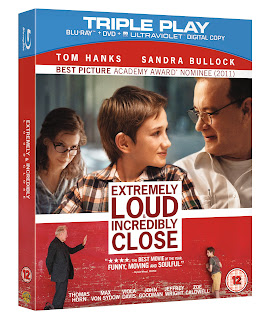 I think that if I had watched this film at the cinema I would have been thrown out for crying too loudly. I cried the entire way through the film from the opening credits to the very last second of the credits. I haven't read the books and so I can't comment on the adaptation, which according to other reviews isn't good, but I can tell you what I thought.

Warning This may contain Spoilers

The film centres around Oskar, a nine year old New York resident who's father died in the 9/11 attacks on the World Trade Centre. Realising that Oskar would have been eight at the time of the attacks (the same age as Top Ender) it made me realise just how hard this little boy would have been affected, and just how hard it must be for all those who did lose loved ones at that time.

Oskar's father (Tom Hanks) used to set Oskar quests/expeditions to complete, which would encourage him to talk to people and to think and Oskar felt that he and his father were the only ones who thought in the same way, had the same thought process and a year after his Fathers death he is drifting away from his mother (Sandra Bullock my favourite actress of all time) and he also feels that he is losing the last part he has of his father too. Oskar finds a key in a vase and he believes this is one last expedition that his Father has left for him, and so sets about New York finding people with the surname Black that may have a connection to this key. 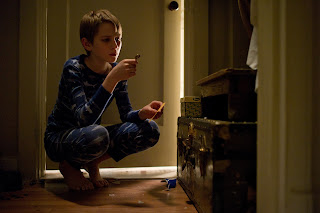 I'm not going to spoil the film, but needless to say this film is about children being separated from their parents and finding them again. It's about love, growing up, friendship, touching other people and about realising that life is sometimes horrid and cruel and that is just the way it is with no explanations and we just have to do our best to deal with it. 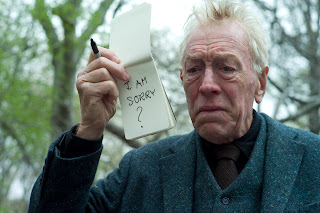 The part of The Renter is played by the very famous (well at least in this house) Max von Sydow who was fantastic in the film, despite not uttering a word. He and Thomas Horn (Oskar) were tugging my heart strings the whole way through and I can't wait for Tops to be old enough to appreciate this film so I can share it with her.

We were sent a copy of the DVD on Blu-ray Triple play (eg a DVD, Blu-ray disc and a digital copy) to review.
Review