It seems unbelievable to me that he has been around for only five years, not because it feels much longer, but because I just can't remember what life was like without him and Tops. So here, instead of a letter to him, are my some highlights of his life so far.


I guess I have to start with his birth because it was his first appearance in the world, I mean I know that he was around for nine months before that and that he could hear me and he could let me know when he was pleased or not (honestly though he didn't kick that hard!) but seeing him, using his name, holding him, feeding him and knowing that we belonged to each other was definitely a highlight.


It was a last minute substitution. Top Ender's teachers asked if Big Boy and I would mind talking with Top Ender's class about babies. We weren't supposed to be there, and yet we were, and Big Boy took his first steps. 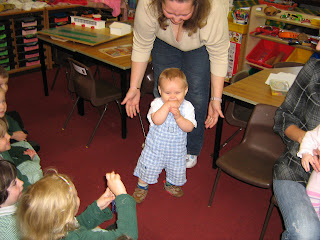 We all saw them together, this special moment in my Child's life.


Big Boy loves playing Minecraft so much and he loves watching videos that other people put online so much that he decided that he wanted to do the same and so he created a youtube channel. Just seeing his face when his saw his first video online was enough to make me understand that the apple doesn't fall far from the tree!

It was a birthday for Big Cousin and we did this to Big Boy. I'm still not sure why, but it was funny.

And that are some of the moments that we remember looking back over the last five years. I can't wait to find out what the next year will bring!