- May 08, 2013
The first Sunday of the month is a fast Sunday for me. This normally means that I will hide away whilst the rest of the family are eating lunch and I'll even get Daddy to prepare it all, so as to avoid temptation. This past Sunday, the family were going to try the new Dairylea Cheeses with a variety of different bases to discover which they liked best and it was also a great way to get the children to try different food combinations (something I've tried in the past). 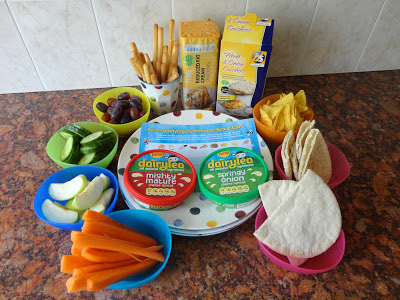 I couldn't help but sit with the family whilst they tried the different combos as they sounded like they were having great fun. The children weren't too keen on the Springy Onion Dairylea, but I think that this was in part Daddy's fault as he kept calling it the Spicy one and the Might Mature Dairylea the normal one. I actually had to point out to Daddy that the Mature one wasn't what he thought and he realised then there was a stronger flavour with a lot more depth than normal. 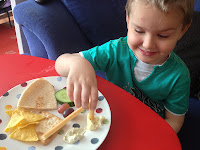 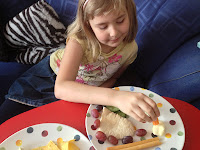 Daddy liked both the new varieties of Dairylea, and had a Bacon and Mature Dairylea Pitta Bread for lunch on Bank Holiday Monday and judging from the speed in which he ate it, it was a delicious combination.

I did eventually manage to have some of the new Dairylea flavours and I have to say that the Springy Onion Dairylea, with slices of apple could well be my new favourite snack, although I could have eaten it on all of the different bases. The Mighty Mature didn't really do it for me, but it was still very tasty and a little firmer than I'm use to Dairylea being. I think that the Springy Onion Dairylea would taste great smothered inside a Chicken Breast and I'm busy thinking up lots of ways in which I can use them both in packed lunches.

We were sent two packs of Dairylea, the Spring Onion and the Mature Cheddar varieties  We were also sent a Tesco Voucher to cover the cost of the other items to taste test the Dairylea flavours on.