- May 07, 2013
I'm a huge fan of Alan Ayckbourn's work, and was quite pleased to see that the play (Relatively Speaking) my Mum and I were off to see at Milton Keynes Theatre was one of his, and I was even more pleased to see that Felicity Kendall was part of the cast as I have a teeny girl crush on her. This is part of the reason as to why I'm not allowed to meet celebrities any more.

The play started and my Mum was only slightly distracted by the gentleman who was sitting next to her, who kept "accidentally" putting his hand on her knee (at least we think it was accidental!). I found this most amusing and luckily as the play was laugh out loud funny I was able to hide my giggles in my laughter at the play.

The play is set in 1967 (although it could have been set today with a couple of changes, I guess life doesn't really change that much) and follows the lives of Ginny and Greg, who having dated for a month are sure that they are in love (more so on Greg's part) and Greg asks Ginny to marry him. She of course answers that one day she will say yes, but that right now she can't and anyway she is off to visit her parents in the Countryside of Buckinghamshire and no, he can't come with her because he hasn't been invited. Of course he pays no attention to her and heads off to an address he finds scribbled down that she has said she is going to, so he can ask her parents for her hand in marriage.

In the mean time we meet Shelia and Philip who are arguing (in a sort of good natured way) over breakfast about Marmalade, suspected affairs and why you don't go to Church on the third Sunday after Epiphany. All just like a long time married couple would bicker and this is before Philip storms off to do some gardening leaving Shelia to clear away the breakfast things.

When Greg arrives at their home he meets Shelia, who is a little confused about who he is, but being polite doesn't actually come out with it. And it's here that the real meat of the comedy starts, for a start Philip and Shelia aren't Ginny's parents and confusion over who loves who, who is marrying who happen because of the sort of conversations that we have in our house when we're talking about two totally different things but neither of us realise. 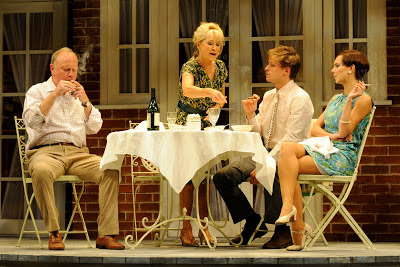 As the play progressed and Felicity Kendall and Jonathan Coy become part of the action, the play really came into itself and I think that Max Bennett who played Greg truly found his character when working with these two more experienced actors than working with just Kara Tointon.

Overall the play is hilarious, and suitable for a wide range of ages although there are some grown up themes (affairs mainly) and a little nudity (Max has a very pert bottom) the play allows the audience to leave feeling quite buoyant and I'm pretty sure that's how I managed to almost take an older gentleman home with me (a different chap to the one who was touching my Mum's knee), he just needed to get his own wife home first...

Relatively Speaking is at Milton Keynes Theatre until the 11th May 2013 and tickets range between £15 and £33.50 not including any booking fees.

We received two press tickets to see the show.