- May 28, 2013
I think I've said it several times before, but it isn't going to stop me saying it again. Milton Keynes is a great place to live and a great place to bring up your family. One of the many wonderful things that makes it so great is that it is a city (okay so we don't have official city status yet, but the Queen and I have been in talks and I'm sure she'll bestow it upon my town soon) in the middle of the countryside. We have great views, just a few minutes from our doorstep and Bow Brickhill Woods is one of those fantastic views. In fact from the Children's bedrooms we can see the woods... well sort of. You'd have to know just where to look, but you can see the tops of a few of the trees! 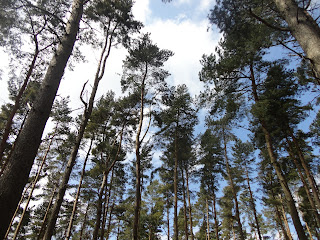 On the last Bank Holiday Monday in May the weather remained glorious here in Milton Keynes (if not a little blowy, but hey this is the UK we can't have everything) and so we headed off for a walk around the Bow Brickhill woods. I spent most of my time, admiring the views instead of taking photographs, but the circular walk that we went on was a pleasant stroll for the four of us, even though we had to dodge a few boggy parts. We started off at All Saints Church, which is a little hidden in the woods now but once was a lot more visible. The only fact I know about the Church is that a Hymn was written in honour of it by Sydney Nicholson and I heard it once. 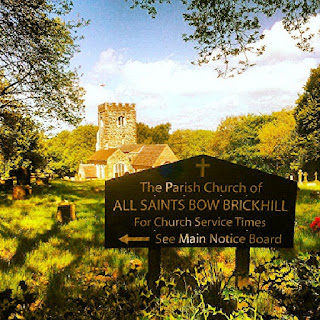 We found some swings hiding in amongst the trees, which Top Ender was only too pleased to clamber up on although Big Boy decided that the safer plan was to just watch. As Top Ender could only just get on the swings (and not off again) we did think about leaving her stuck on the swing until the end of our walk, but we're not that evil. Not this time anyway. 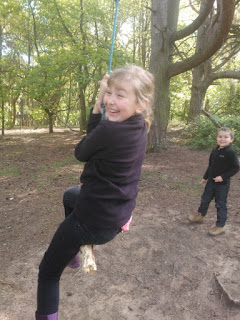 We took our monoculars with us, so we were able to spy lots of different birds and butterflies. Big Boy was particularly pleased with his, and took it upon himself to warn us all of the dangers of looking at the sun through monoculars as in his words;

"YOU MIGHT GO BLIND BY LOOKING AT THE SUN, SO DON'T LOOK AT IT EVER! OKAY?" 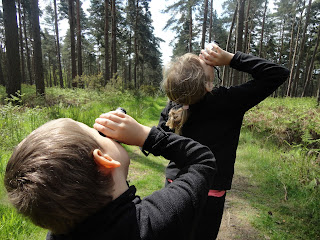 I'm glad that he has at least paid attention to one thing I've told him in the past.

The whole woods is home to several different plants and trees, thanks to past use of the land but there weren't that many flowers about. We saw a few bluebells although nothing like we saw in Bluebell woods and the odd golfer (FOUR!), a few joggers with dogs and Daddy didn't try to kill us all by getting us to walk up an incredibly steep hill... oh wait HE DID! I swear, my husband has no sense of direction, he really should let me be in charge of our walks rather than relying on a map on his phone. 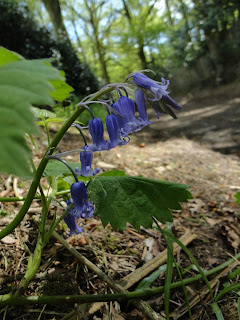 We were able to stick to the paths for the most part by following the right of way signs (the yellow arrows) and some circular walk signs too. There are blue bridleway signs, but we didn't see any and despite seeing plenty of no bike signs we did see several Mountain Bikers, but at least they were polite about us having to get out of their way or else be run over by them. 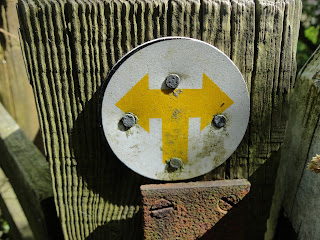 There are some more photos of our walk on the A Mother's Ramblings Facebook page, and we'll be up in the woods again (although not for a few weeks as with it raining again we want the ground to dry before we start walking up there again) to find some geocaching sites that are allegedly up there (forums are saying they might have gone) and to hopefully confuse the children into going on the six mile walk.