Ella's Kitchen The Red One - A Review by Big Boy

- May 16, 2013
When I was off School sick with the Chicken Pox, Mummy said that I could do some cooking with her if I wanted. I didn't want to, but I did like looking in the cook books that Mummy has, as they have nice pictures of food and the food that Mummy makes never looks that good! The book I liked the most was the Red one which is a cook book that Mummy got sent by Ella's Dad. 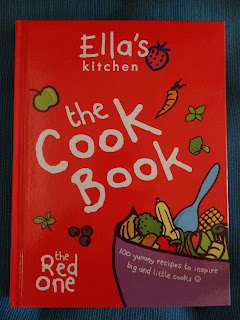 Mum says that the recipes in the cook book look good and easy to make and some of them are really tasty looking. I liked looking through at the different pictures and I found lots of different dishes that I would like for Mummy and Daddy to make with me or Top Ender. 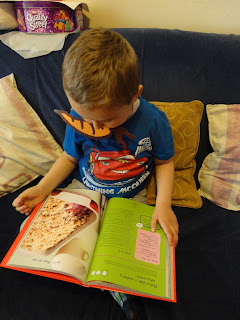 The best things in the book are the puddings and Mummy has said that we can make lots of them and that it's on the condition that I eat some of the other recipes. She says that would be fair, but I said that it wasn't fair and so she said it was Life. I really don't understand Mummy at times.

The cook book has some stickers and some bits to colour in too, but Mummy has said I'm not allowed to do them yet (I have issues over colouring in, it's like Play-Doh. DON'T MIX THE COLOURS UP!) but that as soon as she stops being so meticulous that I can. 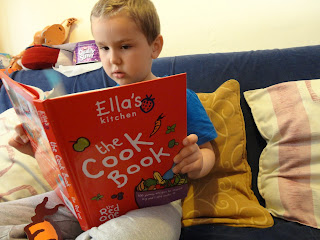 We were sent the Ella's Kitchen The Cook Book The Red One to review.